On the same day, in the evening I was again on tap to preach to the midweek Latino service. Though raining cats and dogs outside, there was a large crowd in attendance. 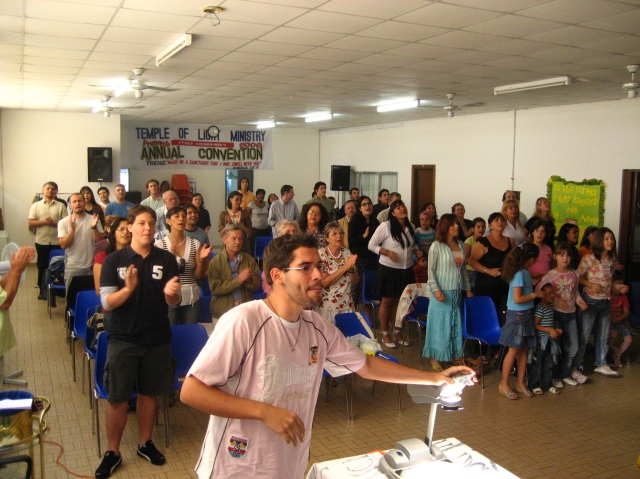 Most were believers, however, there was one man who wept during the preaching so after the service I spent some time trying to find out what was going on in his heart. The first thing he wanted to know was how it was that I knew that he was particularly impacted. Perhaps it was the tears streaming down his face? Anyhow, I called Aldo over to translate and we spent a good half an hour talking to him about what the gospel is and is not. He seemed to get the message and has been back ever since.

Don’t ask me how this all happens I have no idea. All that I can tell you is that the last five or six that have been baptized in the Latino Church have not been south or central Americans at all, but Italian’s, something that was only a dream four or five years ago.

For instance, in May I was invited to go over to Reggio Emilia to have supper at Roberto and Nuncia’s house. They had just started coming to various events but really didn’t quite get it having been influenced by the works doctrines of Catolicism, Jehovah’s Witnesses and Seventh Day Adventicism. Well, We had a good evening wherein I presented the gospel from a variety of directions. Thursday evening, six months later, and all four have come to Christ. Francesca, age seventeen and Lucca 12 years are as intense about their faith as are their parents. Roberto will be baptized soon.

Then there is Alberto. He has been dating the sister of Kevin, a strong Christian. I remember when we had the pizza party last Spring (the one that costs 700 Euro). This was the first Christian event he had ever attended and he will be baptized in a few weeks! God is moving!

Aldo wrote today (Sunday) to say that two more have been baptized this morning.