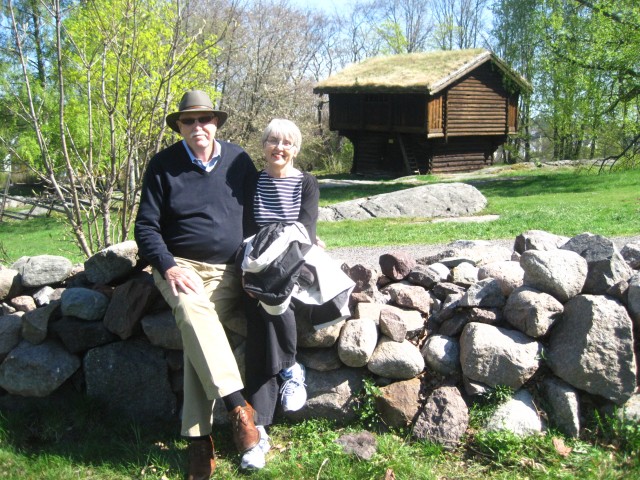 Apparently (but what do we know?) Tonsberg is considered to be the oldest settlement in Norway. On Saturday afternoon our friends Ruben and Birgitta took us by car to this beautiful city along the sea. We went right to the mountain that overlooks the city and the entire bay.

For strategic reasons the first king of Norway built a fortification, a castle with a church (St Michael’s) on top of this mountain. All of the building are gone but for the foundation, yet it continues to amaze me that you are walking on soil that in 871 someone established their home and subsequently a nation.

I took a few pictures. First Jeanne and I seated on a rock wall in front of one of the early log house/barn combinations. The preservation is marvelous

and the roof with grass growing on top of it takes you back to the way it must have been a thousand years ago. Ruben explained that the buildings were designed in this way to keep the rats and mice out as they are not able to climb upside down. So the grain storage areas are built out from the base.

At the very pinnacle of the mountain there is a one thousand year monument (871-1871).

Following the sightseeing (which is always limited by Jeanne’s feet), we all walked along the sea boardwalk and stopped for some rather expensive pizza (not because it was pizza but because it’s Norway… everything in Norway is more expensive than we’re used to in the U.S. and Canada). See the next entry for the story and pictures.

We saw evidences of the Mormons based in Tonsberg (which did not please Tony of course) and ran into an old man who adamantly insisted that Norway is going to be engulfed by water because of God’s judgment. It seems to be a season for prophets everywhere we look!