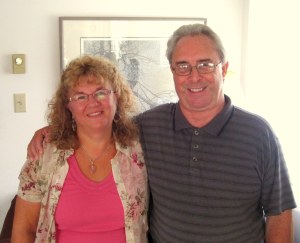 After a leisurely morning we drove out to Carleton Place for a visit with long time friends Jack and Linda Marner. We were clear in letting them know that we would be going to the Hoggs’ afterward and pretty sure that they would lay on more than we could possibly eat, so, “go light.” We assured them that coffee or tea would be all we need. You will learn that Canadians are not able to restrain themselves and “tea” might mean exactly what we got, sandwiches, cole slaw, chocolate squares and in every way pretty much more than we could eat, but eat we did as we have as little restraint for eating as Canadians have for serving.

We spent almost two hours going over old times and then praying.

Jack is a really smart guy and I encouraged him to use his intellect, biblical/apologetic and technological skills as well as gifts in written expression to assist those who just don’t always know what to believe.

At around three we parted company and drove out to Maberly some hour away to see Fred and Darlene Hogg. Fred and Darlene were members of our congregation in Kanata from almost the day we began. Fred initially brought Darlene and their first two children Katelyn and Sandra to Sunday School and then went home, but one Sunday he made the mistake of attending a church service and the rest is history.

Fred and Darlene became leaders in the church. They were with us as we moved from a double wide trailer house (alla community center), to a house (alla church) on Leacock Drive and the final location in a farmer’s field on Flewellyn Road. They helped us build a church building near Stittsville on eleven acres of land.  They eventually had two more children, Julie and Ron. They raised great children. Katelyn and Julie are nurses while Sandra is a graduate in public affairs and policy. Ron is working in sports broadcasting. I always wonder if those growing up in Christian homes attribute their success to the influence of the Gospel? Where would many of these young people be if not for the Christian faith?

The Hoggs are quick to acknowledge God’s grace in their lives and if I had time in this blog I’d tell you about their grandson Luca Ruggiero’s miraculous recovery (most Ottawa news carriers reported it). Hit by a car broadside, Jimmy and Katie’s little three-year-old boy took the brunt of the impact and in so doing wound up on life support at CHEO (Children’s Hospital of Eastern Ontario). As the news got out that Sunday night and Monday morning, the entire church of Ottawa went to prayer on his behalf. Not expected to survive, Luca made it and is now on his way to recovery. Though this will no doubt take a lot of time and care – perhaps he will never be what he might have been – he is a miracle and a blessing. See the story here:

As we drove into the drive of their recent acquisition, an austrian styled home off Highway 7 south of Maberly, a young man hung around the edge of our conversation. I should have known him but out of context I was clueless. Once introduced to us, I was embarrassed because I did know the fellow. I have known him since he was in diapers. Joel Williams is now thirty-one. He is the son of old

Merrickville friends, Fred and Rosalee. Fred was simply one of the best musicians and songwriters I have ever known and now his son follows in his footsteps. A graduate from Humber College in guitar, Joel spent a few years playing country music in a touring band but now, settled in the faith, is a worship leader for Northgate Church (Calvary Chapel) in Perth, Ontario. As the evening progressed and Fred grilled steak skewers on the deck we sat around listening to Joel pick and sing.

When Jeanne and I were at Chapel Ridge Church for the 25th Anniversary, I preached a message that wound up on the internet. The message was entitled “Like Jumping to Catalina Island.” When Joel heard it, he wrote a song by the same title and put it on his MySpace page. You can hear it with some other tunes at  http://www.myspace.com/joelliamsmusic  . I was honored. He and his dad are in the process of making a CD together and we can’t wait to get a copy.

Julie, Fred and Darlene’s daughter, arrived back from a soccer game and joined us for a good visit and dinner. Julie is now a nurse. Now in her twenties, we have known her since she was a baby.