Fred and Rose at Fratelli’s 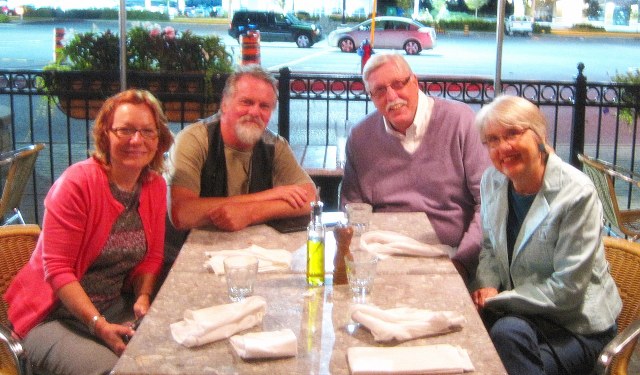 No conversation with Fred ever ended before mid-night. He is getting older so this was a first.

P.S. You may recognize from the tone of this one that it was written by Jeanne but let me take a minute to clarify the title I have given this article. Though Rosie must be credited with leading the way for the family to faith,  Fred has brought a great deal of gifting to the kingdom. Most of you have never heard of Fred Williams. Probably most don’t know the name Leon Redbone either. It was Fred that introduced me to Redbone and somewhere between Redbone and Taylor (whom everyone has heard of)  you’ll find Fred Williams’ musical mastery. In addition to being a very gifted guitar player and vocalist he is also a consummate lyricist with many outstanding and unique gospel stylings to his credit. He and his son Joel are talking of bringing their talents together in a CD of Christian music. Those that know them should spur them on, “especially as they see the day approaching.”

We’ve been trying to set up a time to see Fred and Rose Williams since we arrived in Ottawa. With Rose working two part-time jobs and Fred busy with prison ministry and work, it’s not easy to find a window of time. But on Thursday evening we finally pulled it off. Since they were driving in from the Perth area (after Rosie got off of work at 7), we planned on coffee and dessert around 8:00. Tony picked Fratelli’s, an Italian restaurant in Kanata, since they have authentic Italian food and some wonderful desserts. With some time to kill before meeting them, Tony and I decided to go to a late afternoon matinee at the movie theatre nearby. After reading the book, I wanted to see the movie version of “The Help.”

In typical Tony fashion, he spotted two Mormon boys sitting on a bench outside of the movie theatre and immediately launched into a discussion about DNA and Mormon claims about the origin of Native Americans. As he said later, he didn’t engage them to try to win them on the spot as much as to create some questions in their minds and in the minds of the other two young men sitting with them, who did not appear to be Mormon. You might think that I was worried about being late to the movie, since we only had a few minutes to buy our tickets and get in. But no, I knew how adept he is now at keeping track of time (unlike when he was a new Christian). He broke off the conversation in time to join me with minutes to spare. We were really enjoying the movie but were concerned about how long it was running. We finally had to walk out on what I think were the final five minutes (we’ll have to rent the DVD now to make sure) in order to get to Fratelli’s in time to meet Fred and Rose.

Fred and Rose are long-time friends in the Gospel. Way back in the mid-70s, they were living in the Merrickville area, as we were, when the revival hit. Fred was a talented musician, carpenter, and debater for his current religious leanings – Buddhism. He also sported a thick braid that hung way down his back. From the Hippie era ourselves, we weren’t put off by his style, but we did find him harder to win to Christ than others we met. We hired Fred’s wife, Rose, to work for us in our advertising company and in a short time she gave her heart to the Lord. Needless to say, this bothered Fred a lot. Every time we saw him, it seemed he wanted to push us back by engaging in vehement arguments. Although our whole Christian community was praying for him, some of us started to think maybe he’d never come around. We were faithful to continue to witness to him but we had little faith that he would respond. His wife, however, believed that God would save him. And He did.

It was a glorious turn of events and we got to see the transformation in Fred day by day. Soon he became our favorite song leader in the morning services since he not only played and sang beautifully but also wrote some amazingly insightful and touching Christian songs. Their family grew as they grew in their faith. Today, their three children, Miriam, Joel, and Emma, are serving Jesus too. Tony and I had the pleasure of sharing a meal with their son Joel at the Hoggs and hearing his musical talents as well. (See the blog entitled “Up’da Line: Carleton Place and Maberly”, August 21, 2011.) There is talk of Joel and his dad doing an album of music together and we are fervently hoping that happens!

It’s hard to catch up with so many years of busy lives in one evening, but we did the best we could. Fratelli’s staff patiently waited as all other customers except us cleared out and we were still laughing and sharing stories on their patio. Tony and I are hoping to arrange for Fred, Rose, and Joel to accompany us on a trip to Europe. We’d love to share their unique gifts and love for the Lord with the Christians we work with in Italy, England, Slovenia, and Norway. How I thank God for how He can weave lives together in such a strong bond that it survives every challenge and endures over many generations!

2 comments on “Somewhere between Leon Redbone and James Taylor”