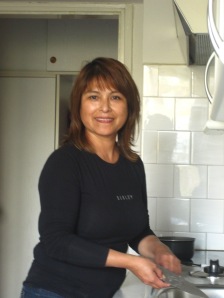 On Monday evening I was invited to have some south American cooking at Gloria’s apartment just downstairs from Chris and Sabina. Since my hostess speaks Spanish and Slovene and I speak neither, I took along Anne who speaks Spanish and English but come to find out, I could understand Gloria pretty well in English. While she was busy at the stove we chatted back and forth then met her two boys. The eldest is thirty and in banking while the younger was something like six years old. Both boys spoke English so the conversation shifted to them while Gloria made a fast supper before the Monday evening prayer meeting.

At just before seven we jumped in the van and hustled ourselves back over to the church for prayer meeting. It was the normal event with a few songs then the Norwegians sang and Tor Erik told his conversion story. Afterwards there was more worship and prayer.

At the end of the meeting, one of the young ladies, Anita, asked if I would talk to her Serbian boyfriend who has been coming to church events and interested in the gospel but had some questions. He being Serbian Orthodox (they are very loyal to their religion as it defines their family and cultural identity) wanted to know the exact difference between what we believe and what he has been

raised to believe. I expected hard-headed resistance as it is well-known that the Serbs are some of the toughest warriors in the world. I was surprised that when I made the claims for trusting Christ alone and not putting confidence in relics, traditions, the priest, icons, family saints and other hocus – pocus, he seemed to see it right away and after prayer, we ate fantastic crepes filled with Nutella!