Evangelicals should know that after 1850, the spiritual climate in Europe changed drastically. The waning of the effects of the Reformation along with the rise of the Enlightenment in Western Europe and atheistic communism in Eastern Europe has made the continent overall highly resistant to the Gospel. European anti-theism is as resistant as Islam.

For almost two hundred years evangelical Christians have attempted to penetrate such countries as Spain, Germany, France, Italy and even the UK (where vital Christianity once found a home) with biblical faith. We might now have to say with the disciples, “We have fished all the night long and have caught nothing.”  With this admission Jesus might respond with, “All right boys, throw your net on the other side of the boat.”

OTHER SIDE OF THE BOAT 1

Remove American paternalism by bottom-up support for national leaders and partnering with pre-evangelized immigrant populations regardless of minor theological nuances.

This is what the Lord showed me some fourteen years ago when I first began working in Italy. I was often told by veteran missionaries that Europe is called the “graveyard of missions.” Many Americans who have answered the call to Europe return home after four years, never to return. This caused me to wonder, should we be fishing on the other side of the boat? Should we perhaps be doing something different than what we have always done without apparent success?

With numerous mission agencies and denominations actively working, statistics were not convincing anyone that we were making a difference in the religious landscape of any region of Europe. Often we were told that 35,000 villages and cities in France did not have one evangelical Christian. This could be said of almost all of the other countries as well, and with 749 million people in Europe, what achievements we can point to are a drop in the proverbial bucket.

What would it mean to “fish on the other side of the boat”? There were several thoughts that eventually emerged. First, it occurred to me that perhaps our American evangelistic models would not work in a post-Christian, postmodern culture where there is little, if any, Christian memory and what memories were held were not accurate. The “hit and run” evangelism methods of tract and literature distribution, street mimes, and attractional/invitational church models proved useless in suspicious and religiously cynical cultures. In most nations, American missionaries were being viewed as right-wing, Republican, politically conservative people who didn’t have  REAL jobs and this perhaps placed us in –E-2 relationships to those we were attempting to win.

Though slow going, it was clear to me that we must win people through authentic relationships because Europeans would likely never trust the message until they had confidence in the messenger. The gospel must be explained, caught not taught, and hard-sell methods would not work. So, to win Europeans would require a steady investment in the lives of individuals. Evangelism in Europe is more about the individual trees than the collective forest.

At that time (2003) I was in Trieste (Italy) working alongside American mission groups that had a two-pronged approach to evangelism: stationed American missionaries and short-term evangelism teams that were shuttled in, armed with a few badly rehearsed mimes and printed Italian renditions of “The Four Spiritual Laws” or “Bridge to Life” tracts, at great expense and little effect.

The short-term teams from North American are a good idea from one standpoint. Young, inexperienced Americans need exposure to the opportunity and complexities of missionary service. I believe in mission trips as the first step in acquiring a vision and heart for fulfilling the “Great Commission.”  Still, with all of the millions of dollars spent in air fare to bring them in, if you ask me if it makes much of an impact, I would have to say that the impact is negligible if not almost measureless in non-need based societies.

Frustrated by what I was seeing (or not seeing), I began to pray about another approach that might be more fruit producing. After a brief trip to visit an Italian/ Dominican couple, church planters in Naples, I was told of another couple who had just moved from Bologna to Parma with the idea of planting a church there. Just before leaving their home for the airport, Gianni said, “If you are ever in Parma, you should meet our friends Aldo and Mariela Cerasino. He is from Puglia and she is from Santo Domingo.” Something resonated and I felt as though I heard the voice of Jesus say, “Here it is! This is the other side of the boat.” With few days left in Italy before returning home to the U.S., I called Parma and spoke to Aldo Cerasino and his wife Mariela. I asked if I might travel by train down to Parma and meet with them to discuss what God had laid upon their hearts.

The next morning I was on the train and in their apartment by afternoon. They were hardly settled from their recent move, and Aldo was still working in Bologna (2 hours away from Parma). It was the hottest day of the summer, and while we talked on the balconetta with cups of expresso I learned of their interest in starting a different kind of church and mission. With thousands of Latinos, many with Italian ancestry and citizenship, moving into the region they were confident that they could start a Spanish speaking church and from this beginning train the Latino people to reach the Italian host culture.

In 2004 we began this congregation of people from Dominican Republic, Peru, Columbia, Puerto Rico and several other central and South American countries as well as the islands of the Caribbean. In all, there were seventeen adults present at the first service. There were no musicians and only a few plastic chairs for women and children while others stood around the room through the entire service, held in a store front shop on the bottom floor of an apartment building. 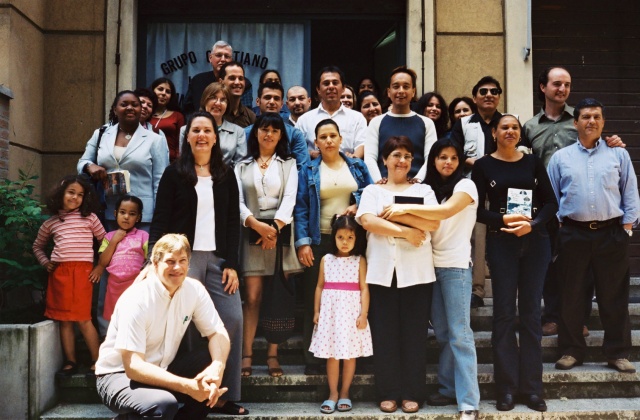 THE OTHER SIDE OF THE BOAT 2

Bottom-up, not top-down. Working toward Evangelical reconciliation and unity.

Today, less than eight years later, there is a thriving congregation of about 250 in that church. Sunday attendance averages somewhere between 140 and 180 people. Gruppo Cristiano Latino Americano has not been intimidated by the host culture; they’ve focused on moving beyond their own ethnicity and reaching Italians with the gospel. These are people providentially situated by God, ready with the language and living in the culture, working and studying alongside Italian nationals. Though the name of the church reflects its origins, it is for all intents and purposes no longer Spanish. The language of the church is, for the most part, Italian and most of those recently baptized are from Italy.

For the purpose of training their own congregation and believers from other evangelical churches, the church launched Progetto Archippo, a ministry training school for those interested in serving the Lord in ministry, missions and the marketplace. Under the leadership of Francesco Abortivi, ACCI, and Gruppo Cristiano Latino Americano, this training school has partnered with more than fifteen international and national mission agencies. You can learn more about this see the website listing at the bottom of the page.

The motivation for embracing the wide variety of missionary organizations was another example of fishing on the other side of the boat. In Italy, as in other nations, top-down, competitive, sectarian isolationism has left the evangelical church throughout Europe fractured. This reality has caused people confusion since evangelicals seem to all be saying something different from each other.

For this reason evangelicals are viewed in one of two ways. They are either seen as a foreign religious cult – something akin to the Jehovah’s Witnesses or the Mormons – or as a religion for immigrants, not the native Italian. Gruppo Cristiano Latino Americano and Progetto Archippo are Christ-centered and Kingdom- conscious ministries committed to Christian reconciliation. They hold to the persuasion of John the Baptist … that it’s the bridegroom who should receive His bride, not a particular church or group.

THE OTHER SIDE OF THE BOAT 3

No pat answers. Stepping up and responding directly to the questions people are really asking. 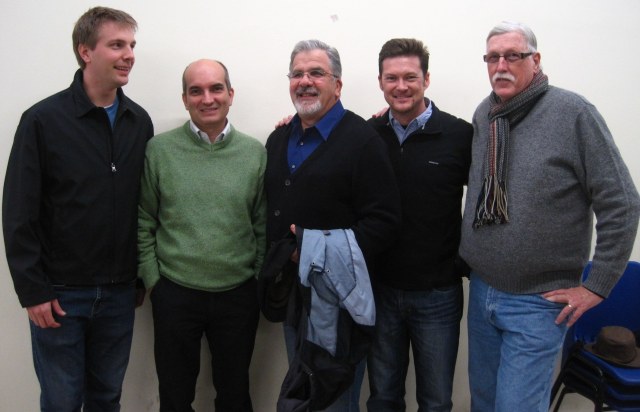 Finally, Progetto Archippo came to the conclusion that Christians were perhaps too busy answering the questions that Europeans are not asking. For this reason they decided to partner with Southern Evangelical Seminary and their ministries – TEAM (Truth Evangelism Apologetics Mission) and Ratio Christi, a growing campus apologetics ministry, to address the real questions that trouble Europeans about Christian faith. While SES and Progetto Archippo both know that we should place no confidence in answering people’s questions, it was clear that people are intellectually biased and would not trust what we had to say if we dodged or couldn’t answer their legitimate questions. As Ray Ciervo puts it, SES is committed to making the way straight by removing the obstacles out the way.

We well understand that Europe is no longer dominantly Roman Catholic – a religious or even a spiritual culture – but rather has surrendered to the philosophies of Darwinian naturalism, materialism, Marxist atheism, rationalism, relativism, existentialism, nihilism and others. Heavy-handed and muddled religious dogmas, unsubstantiated religious claims and confidence in science have caused the European cultures to entirely reject the Christian faith as a viable topic of intellectual discourse. In order to fish on the other side of the boat we must step up to the intellectual challenge of answering these empty philosophies. Ordinary people must be equipped to defend the truth by adequately responding to the false assumptions of Europeans mired in hear-say, intellectual dishonesty and popular anti-theism.

For more information visit these sites:

One comment on “The Other Side of the Boat”