I warned Jeanne. I supposed that Mary would be ready to wow us with food and she did. Though it was after eight-thirty before we climbed another four flights to their apartment we were invited to sit down and having a “po cena d’sera” (a little evening meal). The afternoon meal is usually the biggest so when the “apperitivi” of “mozerella fresca, pane, olivi, salumi” and “picolo biscotti orrechiette” was put before us, I happily gobbled away. Mary didn’t join us and I could still hear banging away in the kitchen. Occasionally, I 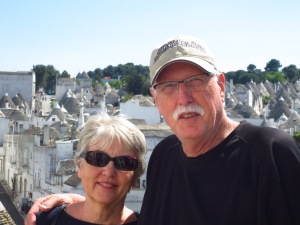 would look at my watch and try to guess when she might join us. This she did in about twenty minutes bearing a massive skillet of spaghetti immersed in a concoction I had never seen before in my life. Oreste proudly told us it was, “la specialita di Maria!” Our eyes bulged as we were handed large portions but once we took the first bite we continued to spoon away until every morsel was drug from the bottom of the pan.

Mary jumped up and ran to the kitchen and brought three more items to the table. Oh, no! We had only had the primi and now for seconda of something that I cannot describe as meatloaf though it was made in a similar way. It was far more delicate and crusted all around with toasty bread crumbs. When sliced. There was an interior of prochiutto and mozerella. I could taste the hint of onion, celery and so forth so it was flavored similar to a meatloaf. Then a “contorni” of peas and onion as well as oven roasted potatoes flavored with garlic and rosemary.

At ten we stumbled onto the street and made our way to our beds.