A brief stop over in the Marseilles, St. Charles Train Station

I took the early bus from Carpentras which took me back through Aix and then to St. Charles, the train station for Marseilles. When I got off of the bus and started toward the Depot, I was prevented from entering by police and safety personnel who had sent everyone outside until the swept the station of a possible bomb. Nothing came of it so in the meantime, having nothing to do, I encountered the Jehovah’s Witnesses and again left them spinning. I used to be terrified of these encounters but now I look forward to it and look for the opportunity. It is a game of cat and mouse. I am the cat. 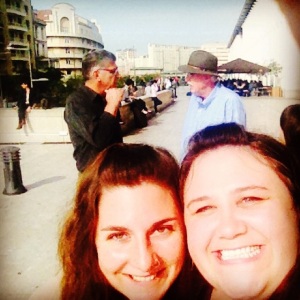 Sarah and I hanging out in France with the legends…—

They had to go to some trouble in order to meet me at the station but it was good to see the Trees’ finally back in France after so many years. Sarah Beth brought along Amy Owen who runs around introducing interns to various missionary teams. She had been my student a number of years ago so it was nice to see her outside of Facebook.

Grayling and Sandra are slightly unsettled having just arrived but they are conversant in French and should be up and running in a short time. Though we only talked for an hour or so, we shared a lot of similar thoughts regarding missionary strategies in France and Europe in general. Basically we both have the same idea that American and existing evangelism methods and church planting models will no longer be attractive in Europe. “High Predictability = Low Impact” and vice versa. In our view, church as usual will not work. With this in mind we threw out many ideas that we confirmed.

They time came for me to go and they headed off.