With little time to spare and lots of distance to cover, we  were in a spin. I had no idea where to get off of the A/(M)-1, so at some point I just left the highway with the hope of finding some road that would overpass the M-1 and take us west. As I committed myself to this task it

wasn’t but minutes before I realized we could drive hours in a south-easterly direction without ever finding a way to head west. We were sunk more, especially because we began seeing signs for Doncaster and Lincoln cities I knew to be in the exact opposite direction.

Finally, I just grasped the first road that went the opposite way and eventually we put the M-1 under us. Though we were still on small, unmarked roads with little villages (Wellow would have been worth a stop) we did occasionally see the name Chesterfield, which provided some encouragement to ignore the speed limits.

After quite a few necessary miles, eventually, we did pick our way into the almost picture- book grounds of Chatsworth, which went on for about five miles through herds of fat Shorthorn cattle and Oxford or Hampshire flocks of sheep. Every tree and shrub seemed tailored to perfection. If one has ever visited Biltmore in Asheville, North Carolina and were awed by the wealth and decadence, “you ain’t seen nuthun yet.” I’m fairly certain that only Versaille in France could top this decadent, over-the-top, opulence. A real Duke and Duchess still live there. 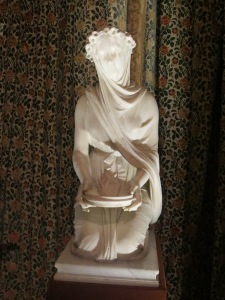 We reached the parking lot with less than an hour to spare. In the drizzle Jeanne got out to get our tickets while I parked and rushed back to meet her. In we went. Whew!

I will just show you rather than tell you. Here are some of the photos we took of the university-sized house and grounds.

Dark was encroaching as we went on to our hard-to-find room in Banbury. This was the first occasion when I came close to killing us with a head on collision. In my hurry to turn around and get back to our B & B, I turned the corner on the right and into the path of a oncoming vehicle. Its driver did not mind blaring his horn.  All the time he was doing this, I was saying aloud, “Sorry, I’m a foreigner, I’m a foreigner.”  We did get our room where, once the windows were opened, we got to listen to trucks, cars and motorcycles all the night long.

Note: In this town I had my first inedible food item when I ordered a pizza at Pizza Express. They advertise themselves as authentic Italian pizza put used what came very close to barbecue sauce or ketchup for their base. I could actually feel the sugar granular between my teeth. For those who don’t know better, it would be the closest they will ever come to Italy.